First things first, buying an expensive gaming PC is not a validation neither a guarantee that its user is going to be one of the best gamers around. This misconception has led a lot of players to question their skills. Owning a super expensive gaming computer is certainly not proportional to one’s success rate in gaming. Simply visiting a store and looking for a gaming system is only going to increase the risks during gaming and not making sure that the optimized performance levels are reached. And that is because of the fact that merely a costly laptop is not an affirmation that it will be able to cope with the modern fay games which come in with the requirements of high graphics display and super-efficient processors. If a gamer intends to mark his/her name in the world of gaming, not the amount of money being spent is a crucial factor rather what you buy and from where you buy for what particular games are going to be the actual booster which may also prove vital in increasing the victory rate of gamers.

If you are one of the enthusiasts who are looking forward to marking their titles in the world of gaming, you most certainly need to equip yourself with one of the best custom build gaming computers which have the capability to provide an optimized and efficient enough platform for the best gaming experience. Here is a checklist that can help custom build your gaming PC and be one of the best gamers around.

As of 2020, with the global digitalization swarming everyday life, online gaming has been one of the latest trends among not only the teens but equally trending in adults as well. Recently, with Arslan Ash Siddique from Pakistan crowning the world championship title for Tekken, Pakistan has observed a rise in the trends of online gaming with more young enthusiasts paving their way in the worldwide competitions to showcase their talents and claim their efforts. This escalated trend has arisen the need to anchor the best gaming laptop on your platform to beat the best competitor around. Therefore, a list of best gaming laptops to provide its user with outstanding graphics and streamed animations have been compiled here based on the opinions and expert recommendations of the world-class gaming gems around.

Here are a list and a brief description of top gaming laptops on the recommendations of expert gamers from 2020.

Predator Triton 500 is what can be called the modern-day beast mode system to provide the users with the best animations and HD graphics for spontaneous gaming sessions. It has an approximate price in Pakistan rupees of PKR 250000 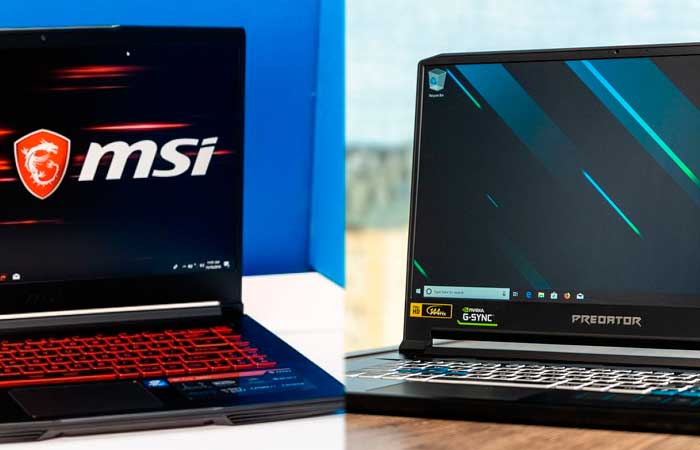 Unlike other gaming laptops with price ranging from $2000 to $3000, this laptop comes in as low as $1000 only. Astonishing. It has a hooking ultra-thin LCD, which is also its flagship feature distinguishing it from the other products down the line. This product is powered by 9th generation Intel Core i7 processors. It has an approximate price in Pakistan rupees of PKR 128000.

This model comes with 9th Gen Intel desktop chips, Nvidia RTX graphics cards, up to 64GB of RAM and up to 2 TB of storage in a RAID0 configuration. It weighs around 3.9 kg, which is quite some weight, but a little sacrifice for the love of gaming will do the job, right. Almost all of its components can be replaced/upgraded by the user itself at any time. It has an approximate price in price in Pakistan rupees of PKR408000. 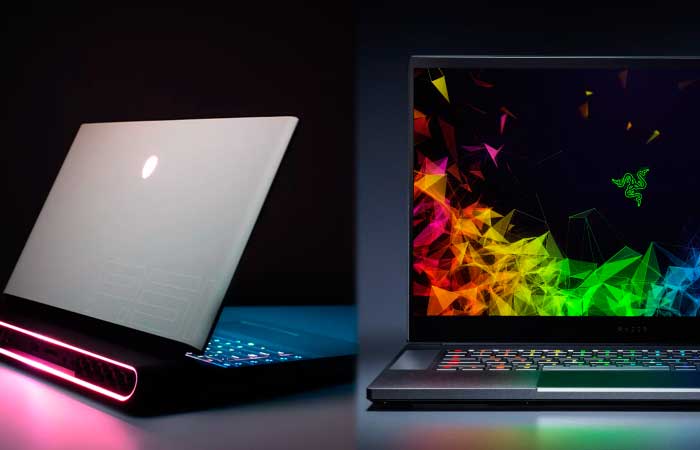 It comes in 3 different versions identified as base Model, Advanced Model, and Mercury White. Each of these models has some particular specifications as well with Mercury White best known for its subtle anodized mercury white finish, which gives a pleasant, simple, yet elegant touch to this model. It has an approximated price in Pakistan rupees of PKR 300000

MSI Stealth is known for its hybrid utilization for both gaming as well as work purposes. According to Digital Trends, “The MSI GS75 Stealth is the epitome of a powerful, portable gaming laptop.” Designed for the unique and harmonized control, Stealth comes in with a surprisingly ultra-low weight as low as 2250 grams and covers a thickness of 18 mm only.

Today, the world of entertainment revolves tremendously around online gaming which provides an entirely different and lively platform to its use since the experience is not merely over a screen, but a whole new effect of communication with the teammates provide a sense of real-time entertainment which is one of the reasons that it is not just popular among the kids but also among the adults owing to its all-new effect. As the discussion goes on about the gaming experience, foremost factors one needs to take care of include an efficient gaming keyboard to provide the user with the best comfortable multi-tasking platform and to increase the response rate of the gamer.

Here is a brief description of top gaming keyboards based on the recommendations of expert gamers.

The mighty Shift Flamer is known for its illuminous body, which adds a phenomenal effect to the gaming experience of users. It provides the users with an augmented gaming experience henceforth making its way up to top on the list of best gaming laptops. The Texet Shift Flamer has a price in Pakistan rupees of around 4500.

Apart from its smart and sleek design, Corsair K68 has a tremendous number of features that stand it out from all other keyboards. It has a remarkable RGB background luminosity effect, which is in proportion with per keystrokes. Not only does this keyboard come with a various number of pre-installed keyboard background effects, but it also technically allows the user to customize the background lights for as many details as possible. 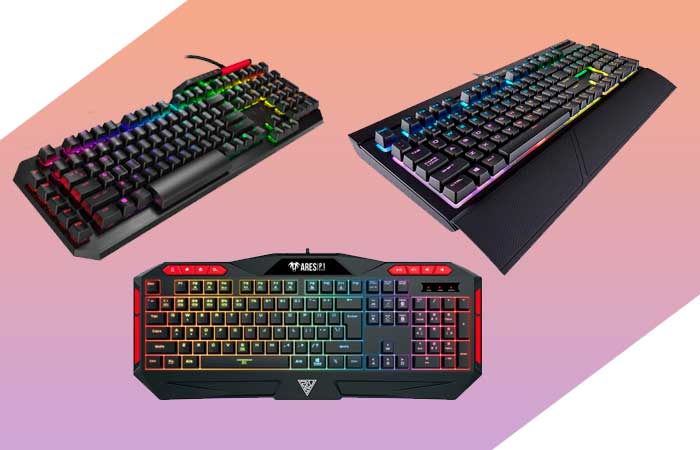 HP Omen Sequencer is known for its dynamic design and harmonic board, which allows the user to keep well engaged and comfortable with the strokes as it has a very highly sensitive optical-mechanical board, which is activated by as low as an actuated force of merely 50 times acceleration. This feature has optimized the sensitivity of this keyboard and makes sure that every stroke counts and are registered so that the quick response game continues with streamlined input responses.

Owing to its relatively lower price, this gaming keyboard has a lifecycle stroke of around 10 million clicks, which is not very impressive compared to some other good quality keyboards with an average lifecycle stroke of around 70 million clicks lifecycle. However, an added feature is that this keyboard comes in with a gaming mouse as well, providing a warranty time of as long as one year for all types of malfunctions that may appear in the course of its use.

An integrated multi-purpose mouse can be something that can be called the climax of gaming experience since an efficient mouse with all many control buttons installed on its surface provides the users with an optimized response rate during the run time of this games, and no switching is required in between hence saving plenty of time while giving a seamless and non-interrupting gaming experience.

Here is a set of top gaming mouse which can optimize and enhance efficiency during the games. 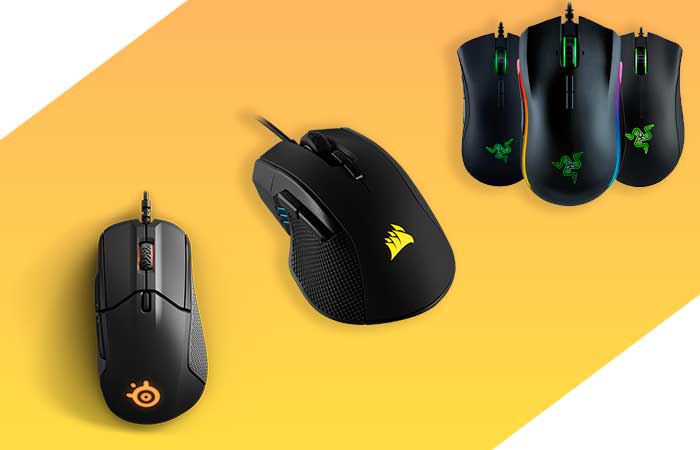 With the development of heavier versions of online games, the computers or laptops of proactive users need to be updated with the latest technologies installed in their gaming setups. Some of such technologies include top of the line gaming graphic cards to provide a clearer high definition absorbing visual details and create a display status to help the gamers entertain themselves with the best graphics of the game.

An insight into the best gaming graphics cards which can which have the capacity to support modern-day games such as Dota, Counterstrike, or Tekken is being provided here.

The most important key factor of this product includes its smooth performance, even at 4K, high settings. The product overlook has a future smart gadget like effect, which makes it aesthetically captivating as well. It has been treated with great thermal solutions, which not only optimizes its performance but also supports boost clocks.

Speaking of its charms, this card is better than 2070 performance without the Founder’s Edition Tax. It has a heat solution installed as power as that in RTX 2080 bottomed up to the processor range of TU 104 optimizes its performance levels to higher operating clock speeds with a slower rate of fans’ spin and relatively lower heat ranges.

However, since it is not as good as RTX 2080, a major disadvantage of this card is that it does not function as accurately as RTX 2080 under 4K, with settings stretched to their maximum.

AMD Radeon is around 10% more efficient than GeForce RTX 2060 with much better sound effects and quality than earlier AMD reference system cards. Its performance-based per metric system is also in competition with Turing based GPUs. 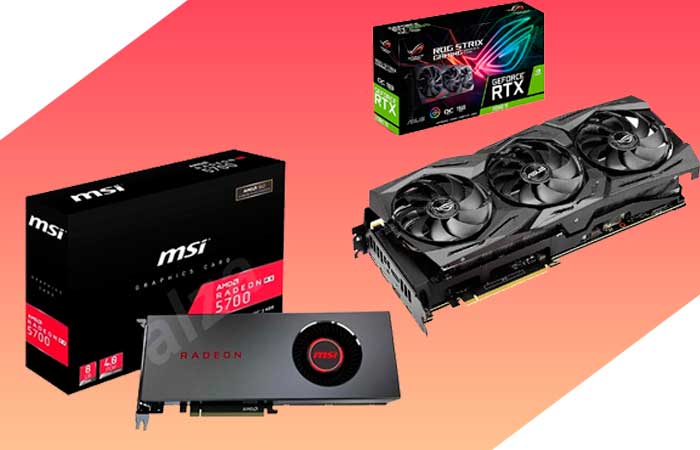 This graphics card has its most suitable use for 1080p gaming setups. Its GPU comes in with Polaris 10 GCN 4.0 while having the core clock frequency of 1411 MHz. It has a video RAM of 4GB/8GB GDDR5 with a TDP of 185 Watts.

Speaking of its pluses, Radeon RX 580 shows a smooth frame rate at 1920x1080. Its overall power consumption is low supports multiple monitors. A major benefit at the end of users is that it comes in 2 versions of 4GB as well as 8GB depending upon the needs of the gamers.

This graphic card is notable for its cost-effectiveness. It is one of the best graphic cards under budget constraints. Its GPU comes in with Ellesmere while having the core clock frequency of 1206 MHz. It has a video RAM of 4GB GDDR5 with a TDP of 150 Watts.

Speaking of its pros, RX 570 is a little better than RX 470, and it exhibits brilliant performance under 1080p conditions. AMD is one of the few versions which are price competitive yet competes on classifications based on specifications. In comparison with GeForce GTX 1060 3 GB, Radeon RX 570 stands out because of its valued 4 GB memory.

Radeon VII has been launched in 2020, marking itself as one of the top competitors around in the world of content. Following its earlier version, which was launched in 2017, Radeon VII is 1.3X faster than its preceding version of Radeon RX Vega 64.

The mighty AMD Radeon had made its entry at the time when the pro gamers had been looking for yet another top of the line graphics card, the most notable of which should be its best display even under maximized conditions such as 4K display.

Only a true online gamer realizes the significance of an ultra-high noise cancellation headsets. A perfect game does not only include perfect processors with high definition graphic cards, but a game can also only be experienced in its true essence when the display is perfect, and on top, the audio is clearer on such degrees of noise cancellation that the gamer gets absorbed into the game all over; Virtual Reality.

Here is a list ranging from the most expensive and technological advance headsets to the cost-effective ones.